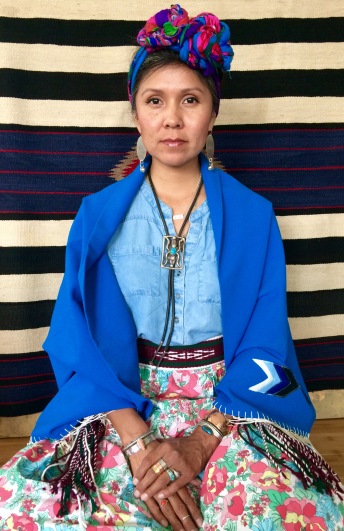 If you come to my house, I might make you play dress-up and ask you a bunch of questions…


As was the case last week when Nanibaa stopped by for a visit. Unbeknownst to her I had an idea brewing once I recognized the resemblance of my saanii scarves wrapped in my hair to Frida Khalo’s infamous hair flowers. The result, Adszaan Frida: 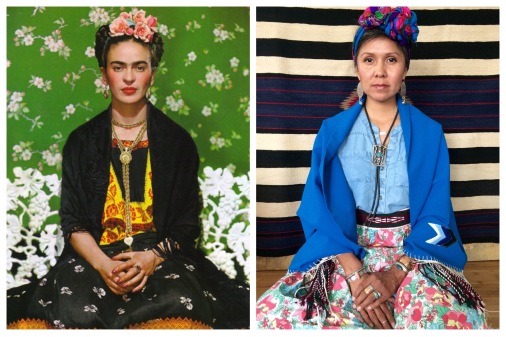 However, minus the bolo tie (borrowed from my husband), I cannot take credit for Nanibaa’s lustworthy jewelry game. 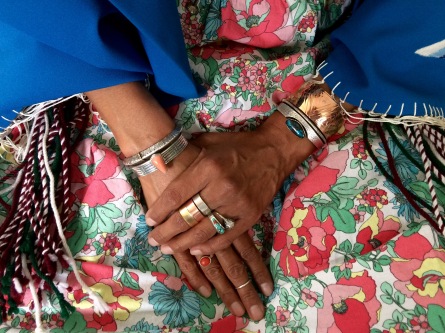 And there is good reason for this, as anyone familiar with Nanibaa probably knows, she herself is a talented silversmith.

Nanibaa Beck (Ta’neeszahnii/Tłízí Łání/Tsé Deeshgizhnii/’Áshįįhí) grew up in Arizona, calling both Pinon and Phoenix home, or as she says “Pinon is my hooghan and Phoenix is my hometown”.

Growing up around artists, specifically her dad who is also a silversmith, it seemed almost inevitable that Nanibaa would become an artist as well, but she did not always see it this way.

“Anthropology was always my interest. I have always gone to museums and a lot of people in academia had always been around my family, including anthropologist David Alberle who stayed at my nali’s place in Pinon. But once I majored into anthropology (as an undergraduate), I realized the program was more archaeology- anthropology. It had a disconnect in how I saw Native people, in how Navajos were being talked about and it didn’t really fit with my perspective. When you attend [art] shows and events,  you see that vibrancy that is present in Native people, in our culture. But where is that captured? So I studied anthropology, and then I added American Indian studies and art history as minors halfway through my time at ASU. My plan was to be an academic and to find a way to be connected to Native non-profits or Native art organizations.”

After graduating from college, Nanibaa worked at the Arizona Humanities Council for a few years but wanted to get back into academia so she enrolled as a graduate student at New Mexico Highlands University, studying anthropology. But soon she found herself involved in Native art markets, galleries, and museums which eventually lead her to launching her own jewelry label, Notabove, in late 2013.

“I started with making the language necklaces, it was that “Aha!” moment making those types of necklaces that really sparked Notabove. I’m really proud of the language collection – that’s the purpose of it all – accessibility, affordability and language. That’s the collection I love seeing grow the most.” 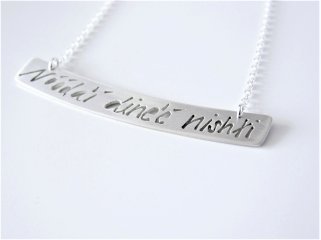 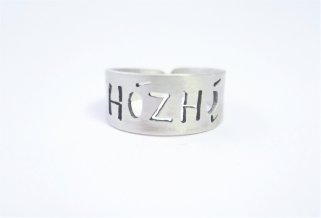 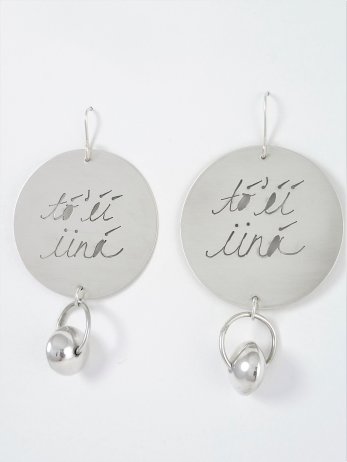 “I started doing the other jewelry a couple months later. And that was a little frightening because you have expectations you put on yourself but also expectations by your friends of what you can create after all these years, so it has been really rewarding to see and hear the responses since the first pieces I’ve made.” 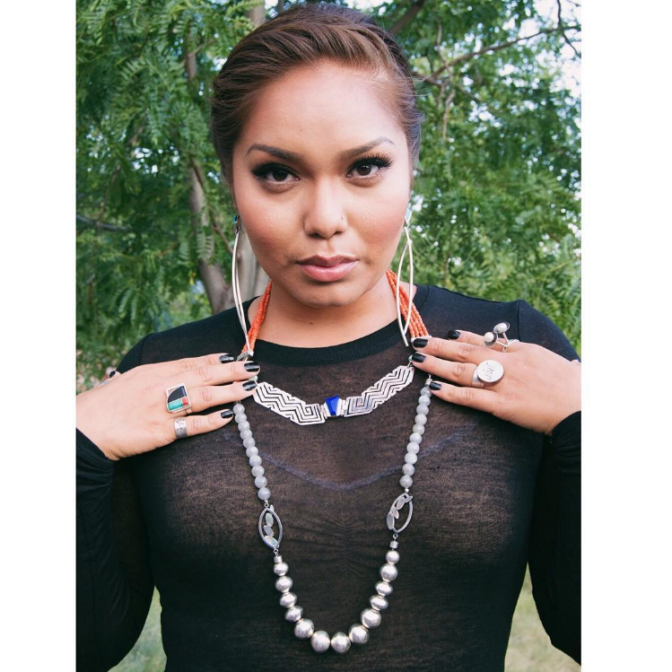 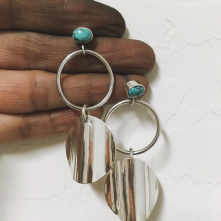 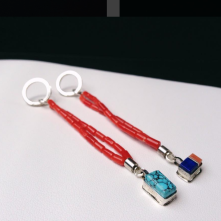 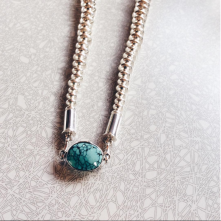 Nanibaa says the inspiration for her jewelry is a combination of many influences, from her family (weavers, silversmiths, and painters), to her background in anthropology and art, to her conversations with and observations of Natives peoples around her. Her work is the thoughtful embodiment of what she sees happening around her as well as the teaching she has grown up with. 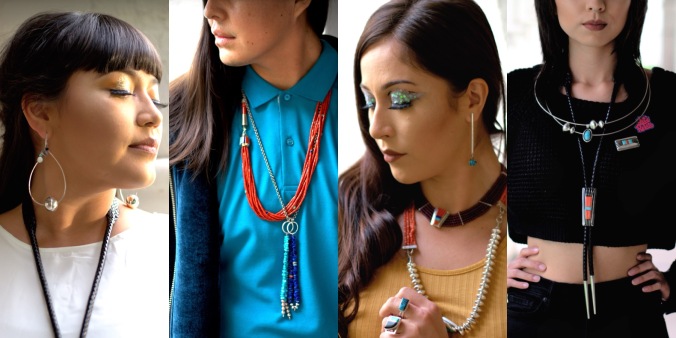 “Within art circles there is a lot of talk about the differences between contemporary and traditional art. But this dichotomy is not what I see; we are not of two worlds. So when I make my jewelry I am intentional in making sure my work is seen as traditional. That arbitrary category of our work as “traditional” can’t be something that only lives in the late 1800s to early 1940s, it’s based on this idea of capitalism from non-Natives trying to make money off of the “cheap labor”of Native Americans of that time period… that can’t be “traditional” jewelry and it bothers me when that type of comment is made.” 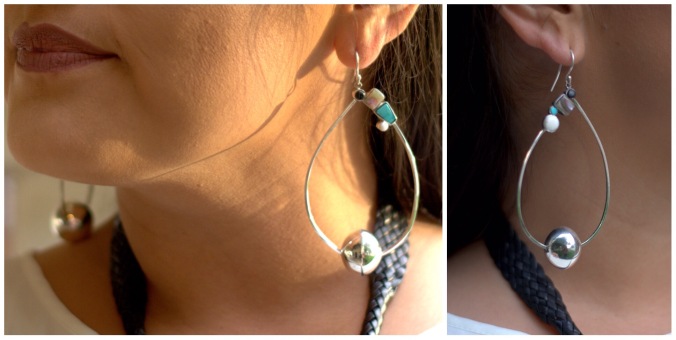 earrings with the Navajo four sacred stones, accenting turquoise on the left and white shell on the right

“Recently at the Heard Museum show, I made it a point to use the four sacred stones in a lot of pieces that I had. I made it a point to tell people that a necklace that looks  “modern” and “contemporary” is not. It is traditional because if you look at the necklace, it has the four sacred stones, it comes from a traditional knowledge base and more. It was coming from a sense of trying to figure out a lot, not only about the direction of my work but also mourning for my mom after she passed in August. So I wanted to be intentional about the stones I was using. I used all four sacred stones but over time it kind of became something where this shape that I was just messing around with became a mountain, a sacred mountain. And, it had the pearl standing in as the white shell on the side and that became the east. It was finished once I had the clasp in the back completed with the turquoise on the left side and white shell on the right.”

As for what’s next for Nanibaa and Notabove jewelry, she says,

“It seems that when major life events happen, the jewelry grows. You know I’ve been talking to you about wanting to start a family soon and we are moving. So that growth, and whatever challenges happen with that growth, the jewelry is going to grow right along with it and that’s exciting. I’m looking forward to seeing what that is and I cant exactly plan for it. I do look forward to when I can look back in hindsight and say ‘I see where it happened there.'”

“On top of that, we are at an age where we are finally “grown ups”- you, me, all of our friends. We are capable of doing things – we are resourceful, creative people who can make things happen. I see both younger and older people coming together around these ideas, that is so, so exciting! And I like the potential of whatever that may be. I really feel that the internet and social media has allowed that to grow. As a Navajo jeweler, this, to me has become an entirely new opportunity. Being a jeweler and Navajo today, I want that to be something of resiliency and strength and also preservation of our way of life. It’s a very vague notion but there is something there, and I’m excited.” 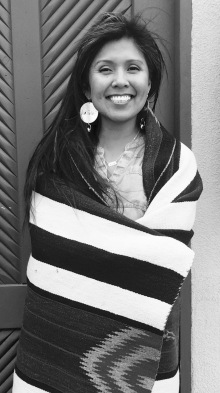 I made her take this one 😛

Check out her website Notabove.com for jewelry, blog posts, as well as upcoming events and contact info.

Notabove jewelry is also available at Beyond Buckskin.

One thought on “Nanibaa Beck”